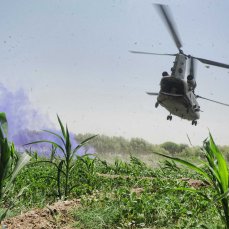 The Medical Emergency Response Team (MERT) extract a member of the Afghan Uniformed Police (AUP) following an IED strike . The policeman was injured whilst soldiers from A Company of 1 Rifles based in Patrol Base 4 took part in a joint heli assault with the Afghan Uniformed Police (AUP) in Helmand today (15 Aug 11). Although the AUP lost a man to the IED they carried on with the patrol. During the final phases The Rifles and the AUP came under heavy contact. Both soldiers and the police stood their ground and managed to fight through the attack to recover to a nearby patrol base. During the operation the police seized a quantity of HME from a compound and a sharp shooter from the Rifles eliminated an insurgent involved in the contact. NOTE TO DESKS: MoD release authorised handout images. All images remain crown copyright. Photo credit to read – Sergeant Alison Baskerville RLC

Hungary – Serbian border the refugess form Iraq try to cross the border in the illegal way After 30 km walking, the group failed to cross the border, so they had to return to Serbia, saying goddbye with the words “do you come with us? You are lucky, you can choose, you can do what you want, you are free” ph © Andreja restek 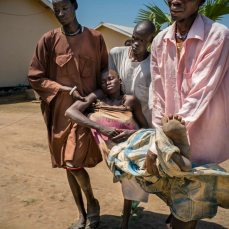 Panthou village, Aweil South county, Northern Bahr el Ghazal state, South Sudan October 14, 2015 Thirty-two year old Arek Nuoi, mother of four, is carried by her family members to a hospital bed at Panthou Primary Health Care Center, where she will receive urgent treatment for acute malaria. She arrived unconscious, transported in a chair her family had tied to the seat of a bicycle, which they pushed for one and a half hours from their home village of Maper. She had first shown signs of illness the previous night, complaining of headache and bodily pains. In the morning, she began to vomit and fainted. The health care center at Panthou is currently the only place where patients might be able to receive free treatment and medicine for malaria in the remote rural county of Aweil South. The center has only two staffs – both medical assistants – qualified to diagnose and treat patients, yet was treating approximately 150 malaria patients per day. In October 2015, the center had just received a supply of ACT oral medication for malaria, which they had been out of stock for two months. With the high number of patients, this new supply would be depleted in a week or two. The center also had a low stock of quinine, which they reserved for serious cases. There were no RDTs (rapid detection tests) in stock, so diagnosis could only be done clinically based on symptoms observed.

Iraqi Kurdistan. PKK fighters on top of Qandil mountains. In the last months the struggle between Turkish government and PKK intensified, provoking hundreds of victims among the Kurdish and Turkish soldiers.

The mother of one of the young boys killed by the Army in Port Said reacts to In the parking lot outside the Police Academy, the crowd initially exploded with cries of joy and praying at news of Mr. Mubarak’s life sentence. MAYSUN 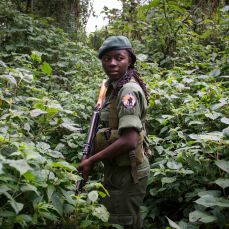 Aline, along with other rangers and park staff visit the gorilla’s in the parks Mikeno sector, where the majority of the gorilla families live in Virunga National Park. Therefore there has been a surge of poaching and violence in the area. For the first time, women have taken up the most dangerous job in wildlife, becoming para-military rangers at the Virunga National Park in DR Congo. Virunga is Africa’s oldest national park and home to over 200 of the world’s 800 remaining mountain gorillas. For two decades it has been at the centre of a war. Hundreds of rebels operate in the park and over 150 park rangers have died protecting it from them.

UKRAINE, Shyrokyne: Linsa, his warname, shooting with the anti-tank grenade launcher. Next to him, his comrade Andrei is blocking his ears as the noise of the shooting is very high. Linsa is targeting some tanks that they have seen on the separatist side of Shyrokyne. June 26, 2015. 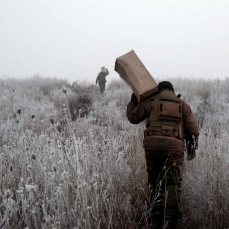 Vuhlegirsk, Ukraine. February 15th, 2015. Members of the first artillery brigade Slavic recover supplies provided by their comrades on their different positions around Debaltseve. After weeks of fighting with artillery and surrounding every day a little more the Ukrainian army, pro-Russian forces have recovered the town of Debaltsevo ,despite the Minsk agreement signed on February 15th, 2015.

Lebanon – Faqaa – Selma, 35 years old, is from Zahra. She arrived two weeks ago, after her house was razed by tanks and mortar shelling of the Syrian Army. ?We became refugees in our own place, just because we are Sunni?, she says bitterly. Without documents and money, her family is forced to rely on donations and help from the Lebanese families of the village she now lives in.